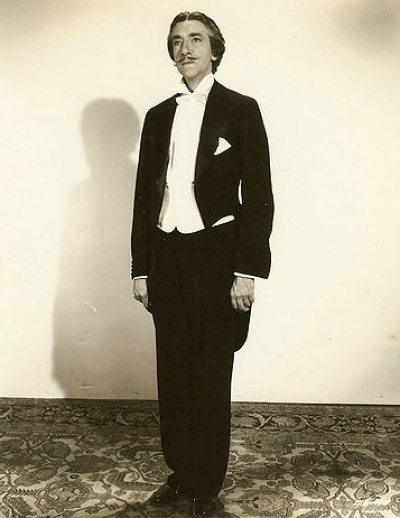 Pedro de Cordoba, who appeared in his first film, a 1913 version of "Carmen," was actually a classically trained theatre actor who confessed he did not enjoy appearing in silent films nearly as much as he liked working on stage. However, de Cordoba's career during the early silent film era was prolific and he soon became a popular leading man in early Hollywood motion pictures. His Broadway career cast him with such legendary stage actresses as Jane Cowl and Katharine Cornell.

His deeply-resonant speaking voice made him perfectly suited to talking pictures, unlike many silent film stars who had neither foreseen, nor prepared for, the day when sound would meet celluloid. He enjoyed a career as one of the busiest character actors in Hollywood, from the 1930’s through the ‘50’s. He was most often cast as aristocratic, or clerical characters of Hispanic origin, because of his last name, as well as his royal bearing.

In actuality he was born in New York City of parents who were French and Cuban in origin. He was a devout Catholic, which no doubt contributed to his priest-like demeanor. He was very well read and knowledgeable about the Catholic faith, and even served for a time as president of the Catholic Actors Guild of America. On rare occasions he would be cast in the role of a villain, but most of the characters he portrayed were as refined as was the man himself, in real life.

De Cordoba’s most memorable part is probably his portrayal of the "living skeleton" sideshow character who hides fugitive Robert Cummings in his carnival wagon in the Alfred Hitchcock film, Saboteur (1942). The last film in which the actor appeared, a political drama set in an unnamed South American dictatorship, Crisis (1950), was released shortly after his death.
Rate This