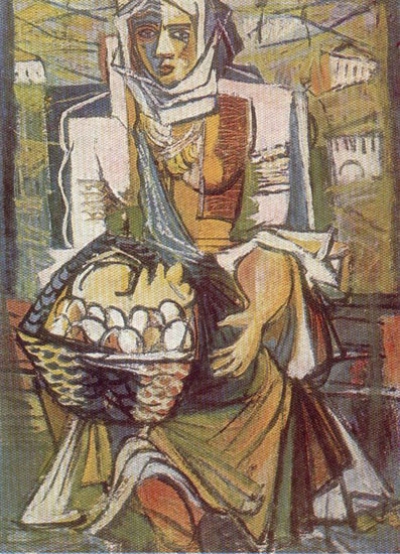 Born on May 24th 1895, Marcel Iancu is remembered today as one of the most important Dada artists of Jewish-Romanian origin, a close friend to Tristan Tzara and one of the most interesting and original artists of the last century. Very much in touch with European art and experiments, mixing Romanian traditions, Jewish identity and avantgarde techniques and themes, Marcel Iancu was a painter, architect and writer. He lived for many years in Romania, before finally settling in Israel, where he died.

Marcel Iancu was born in Bucharest and during his highschool years, together with Tristan Tzara and Ion Vinea edited the avantgarde magazine called "Simbol", in 1912. It was just a humble beginning for a group of Romanian Jews who would forever mark the face of European culture and art. The future artist moved to Zurich in 1915 and nerolled at the Architectural Academy, which he will finish in 1917. In the meantime he also attented several artistic gatherings, met Hans Arp and once again he was reunited with Tristan Tzara, the briliant leader of the group. Together with Tzara, Iancu will be one of the founders of the now famous DaDa movement. It was over the next years that the group will have it's first exhibitions and shows, becoming increasingly popular all over Europe. They produced an impressive number of works of art, posters, masks, literature, poetry, they organised conferences about DaDa and the avantgarde and made the new movement known all over. It was in 1919 that Marcel Iancu, Hans Arp and Alberto Giacometti founded the group "Radical Artists", which will be short lived.

It surely seemed that Marcel Iancu was there to stay, in the DaDa movement. Yet, after spending sometime in Paris, Iancu left the group and abandoned all DaDa and Surrealist ideas, techniques and themes, trying to find his own, personal and original way. He returned to Romanian in 1922 and was soon known as one of the key promoters of avantgarde art. He remained close to Ion Vine, exhibited several of his paintings, together with Milita Petrascu and Margareta Sterian, and enjoyed an unexpected surprise for someone who practically shatered all conservative views about art.

He was a member of several important artistic and cultural groups, the best-knowk being surely Criterion (1933 - 1937), which helped him even mor ein promoting his ideas and artistic beliefs. It will only be in 1941, for fear of persecutions, that he had the huge chance of emigrating to Palestine. Later, after the founding of Israel, Marcel Iancu finally felt that he was finally at home in the new Jewish state, although he was still fond of Romania and France, where many of his friends still lived and where he enjoyed his early success.

In Israel he was one of the most popular and respected cultural figures : he continued painting and exhibiting, he created his first architectural projects, founded the "new Horizons" group and in 1953 even founded a small artistic society in Ein Hod. In 1952 he also exhibited at the Venice Biennale. Marcel Iancu passed away in 1984. He was one of the most loved Jewish artists of Romanian origin in the world, and due to his involvement with the DaDa movement and his following creations he was considered one of the most interesting and original artistic voices of the 20th century.

Over his long career as a painter, Marcel Iancu passed through several interesting phases, being influenced especially by avantgarde, mainly DaDa and Cubism, but not rejecting any other influences. With a strong and original manner of painting and drawing, which also left it's mark upon his architectural style, he always offered something new to art lovers.