Alexander III the Great was born in 356 B.C.E. in Pella, the ancient capital of Macedonia. His father was King Phillip II and his mother was Olympias. From the earliest age his mother taught Alexander that he was a descendent of Achilles and Hercules and so the little boy became focused on being a great ruler.

"Here is the man who was making ready to cross from Europe to Asia, and who cannot even cross from one table to another without losing his balance."

This were the words of his drunk father, who always called Alexander a bastard.
At the age of 13 Alexander was the student of the great Greek philosopher Aristoteles. He learned philosophy, medicine and science and cultivated his interest in reading. Three years later Alexander was called to fight a Thracian rebellion, while his father was away. Alexander was only 20 years old when his father King Phillip was assasinated, so the young men became King of Macedonia. He had a small but efficient army and he was determined to conquer the world. On his campaign he took along with his solders architects, scientists, historians and doctors.
The first war was against the Persians at the Granicus River (today: Turkey). King Darius III had a great army, but Alexander was an intelligent and brave commander and despite being outnumbered about 13 to 1 his army won the fights. 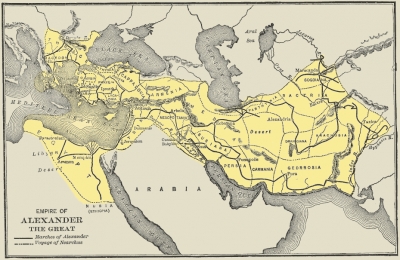 He turned south along the Mediterranean coast, conquered Tyre, than Gaza and than he moved into Egypt, where the people welcomed him, because he was their liberator from the Persian  rulers. After a break King Alexander went through Palestina towards the Tigris River. In Gaugamela he met the Persians again. Their King Darius III was later killed by his own people. Alexander went to Babylon and he humiliated the Persians by burning their great palace at Xerxes. After the fight with the Indian Monarch  Porus, who had 25.000 solders and 200 elephants, Alexander was victorious again.

Alexander was a great king and a noble man. After the battles he always visited his wounded solders, examining their lesion and praisng them for their courage. For his fallen men he arranged the funerals.
Alexander returned to Babylon, he was now the great Conqueror. In 332 B.C.E. Alexander fell victim to a deadly malady: malarial fever. He was only 32 years old when he died.

Alexander III the Great, the King of Macedonia and the conqueror of the Persian Empire is considered one of the greatest military geniuses in the world history. He was a great source of inspiration for Hannibal, Pompey , Caesar and Napoleon.

Public Release. I'm not sure whether this work will be under CLA or not.Right now we're sidcussing the handover feature with our customer, so that's what I'm searching a developer for. Other features are being discussed as well.Could you please introduce yourself here or in a private e-mail?

Way to go!! Glad to hear you are safely where you npanled to be. Some interesting surprises along the way. We will be praying for you and the others. Guess we could say that because of the weather there -the Lord has made His invitation to the unsaved too hot to handle so you have to give it away, right? Hang in there!

Thanks for sharing! I rlaley do think that as you post, it allows those of us here at home to be able to track with you and pray more effectively! I could get used to this! Maybe we should ask our missoinaries to each consider begining a blog or twitter account.Praising the Lord with you all, and praying for your Impact at tomorrows Bible Club .Also very excited at the prospect of Skyping with the team tomorrow!Blessings team; Paul

Great post today. Really resonated that to be the type of Christian who is ivnilg an inspiring, out of the ordinary , joy-filled, generous life, you have to give your heart to God first and foremost. (The other way round is lethal- trying to do good things in our own strength to make God accept us). A simple truth, but life changing if applied- thanks for that, Dan.It almost shocked me how up front Paul was about money. Kind of goes against our British culture! But I suppose he knew that money can be a real sign of what's got your heart, and he loved the Corinthians enough to challenge them on this area.

The quote in the beginning was said by Alexander TO his father Philip after he married a woman called Eurydice, at their wedding banquet. Also, he did not burn "their great palace at Xerxes". This palace was in Persepolis and occurred during a banquet, at which Alexander was drunk at. He was convinced by the courtesan Thais to burn the temple down, which he later showed remorse for. You did happen to leave out an important battle in Alexander's conquest of the Persian Empire: the battle at Issus, where Darius fled the battlefield. Lastly, it is still unclear what caused Alexander's death and therefore is inaccurate to say that he died of malaria. The theories range from alcohol poisoning to malaria to poison.

When the ancient historian or the ancient biographers writes that Alexander said something, they mean that he actually said it. Many soldiers that were later freed of duty wrote books and biographies. What they say is what we take as truth! Just because they wrote it 2500 years ago! When some stupid FYROM-Slavs, 2500 years later wrote that Macedonia was not Greece doesn't mean that his word is equally important! Historical facts are the things that happened then and the reports of ancient Historians and Biographers. Historical facts are NOT the distortion that the FYROM-Slavs try to believe after the 20th century, as a way of existence in their unknown historical traces.

Alexander to Persians: "Your ancestors invaded Macedonia and the rest of Hellas(Greece) and did us great harm though we had done them no prior injury;... I have been appointed the leader of Hellenes(Greeks)" Arrian, II,14,4 Anabasis of Alexander

No matter how any modern historians try to spin it, Alexander of Macedon left his mark on the world as a Macedonian, not as a 'greek' - hence the name 'Alexander of Macedon'. It is clear why the modern Athenian nation is trying to get a stronghold on the Macedonian name - to appear as though they have ties and significance in ancient history. With even a little bit of research it is quite easy to find that the modern nation of Greece acquired Macedonian lands for the first time ever after the year 1913 AD. No Macedonian lands were part of this modern nation prior to this year. This evidence cannot be spun by any modern historians no matter how much they try to spin it.