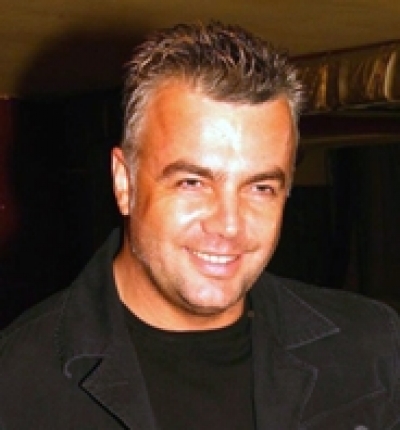 - Former football player, Adrian Enache abandoned the sport career at 19 years, choosing music. Separation of sport was not final, football remaining his great hobby, as evidence, he is captain of the National Football Team of Artists.

The musical debut was made vocal in the Phoebus rock band from Galati, a band that won major prizes at festivals in the '80s. Some of his former colleagues now are singing with Stefan Banica Jr.

1988 was one of his musical career crossroads. After he was in the attention of Compact group that wanted him at the vocals because Paul Ciuc was at that time in the U.S., Mihaela Runceanu noticed him too. She, the person who subsequently formed the greatest voices of Romanian pop, persuaded Adrian to join the Art School, which graduated at the Mihaela Runceanu - Ionel Tudor Class.

A year later Adrian Enache is qualifying at the finals of the Mamaia National Festival but his style of interpretation is too libertine and non-Romanian to be pleasing to the authorities - and so the jury too - so Adrian Enache did not take a prize. The public noticed him and warmly applauded his interpretation.

Proper debut in pop music was made in 1990, obtaining the second prize at the Mamaia Festival, in which in time the artist becomes a constant presence, television and radio stations being interested more now about his talent.
After all this events followed a period of unquestioned glory. Adrian Enache ledger signing at the most important shows in the country and abroad. In 1996 came his first album, This is madness, which was launched at the International Festival Golden Stag from Brasov, Romania, in the presence of his idol, Tom Jones, who collided with Adrian Enache a glass of champagne. The event was backed by the launch of the book Runing after a star written by Arina Avram about Adrian Enache's life. In 1997 he won the second prize at the International Festival Pamukalle in Turkey at the section of interpretation, where he sang before Diana Ross and Tom Jones. Is the time he is remarked by Toto Cutugno and Natalia Oreiro.

The second album, Mad about Women, was published in 1999 in collaboration with Taxi, 1Q Sapro, Elena Carstea, Aurelian Temisan and Daniel Iordachioaie. In 2000 Adrian Enache represented Romania at Voice of Asia - Kazakhstan, where he obtained the third prize at the Interpretation and Special Award for best male voice.

Adrian Enache begins to participate at more and more social events with the participation of good people even more as in 2001 is included evergreens album My Favourite Songs, requested at The luxury hotels in Romania.

In August 2002 Adrian Enache gives great blow to his career at the Mamaia Festival with the song One Night, composed by Andrew Kerestely the story of Zoe Alecu. At the end of 2002 the artist makes a sudden shocking change of image and repertory. Friendly appearance, tanned, energetic and full of surprises, Enache Adrian proves that music is, for him, almost an organic way of living, as the artist said.