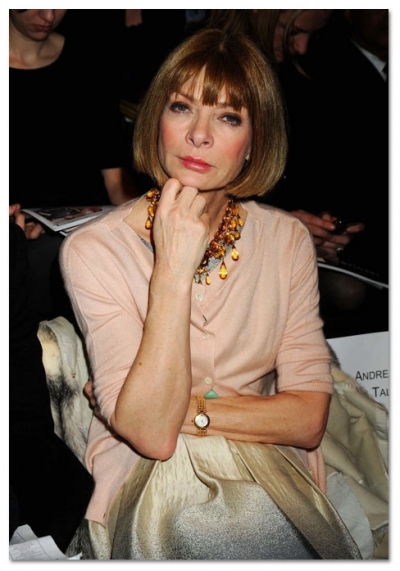 "You either know fashion or you don't" (Anna Wintour)

Anna Wintour was born on 3 November 1949 in London. She was named after her maternal grandmother Anna Baker. Her father, who died in 1999, was editor of the London Evening Standard and her mother was the daughter of a Harvard law professor. Lady Elizabeth Foster, Duchess of Devonshire was Anna’s Wintour's great-great-great-grandmother, and Sir Augustus Vere Foster, the last Baronet of that name, was a granduncle.

She became editor chief of American Vogue in 1988 and since than Anna Wintour is one of the greatest fashion journalist. She became an institution in the fashion world and she’s very appreciated for professionalism and her support for younger designers. Her demanding charakter brought her the nickname "Nuclear Wintour".

Anna Wintour’s fashion journalism career began at two British magazines and than she moved to New York, where she worked for Harper's Bazaar and  Viva. She turned to London and took over the British Vogue. In 1987 Wintour returned to New York to take over House & Garden and a few months later she became editor of Vogue. Vogue held its

Teen Vogue, Vogue Living and Men's Vogue were also three successful publications.Teen Vogue has published more ad pages and earned more advertiser revenue than either Elle Girl and Cosmo Girl, and the 164 ad pages in the début issue of Men's Vogue were the most for a first issue in Condé Nast history.

Anna Wintour is one of the most powerful people in fashion, she helps young designers, she is setting trends and many fashion journalists are asking for her opinion. She is a very influent woman and raised over $10 million for AIDS charities since 1990, by organising various high profile benefits.