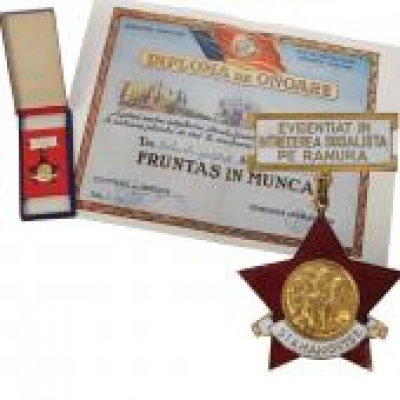 Some of the gifts received by Nicolae Ceausescu – former Romanian dictator – were sold at Artmark auction house. The auction whichwas named "The Golden Age" is a reference to the final years of Ceausescu's rule, when Communist Party officials painted a rosy picture of life in Romania, while, in reality, people struggled with even the most basic aspects of daily life.

“The Genius of the Carpathians” – as the dictator was known - was overthrown during the 1989 anti-communist uprising and executed with his wife Elena.

The auction gathered objects from private collections and items that belonged to the family. There's a carpet depicting the family of the dictator that should have had pride of place in the People's Palace has a starting price of Euro 800, a swanky pen for at least Euro 2,000 which Ceausescu received during a visit to Japan in 1975, and an assortment of furs which will sell for at least Euro 1,200. The swankt pen was bought with Euro 3,750 and the tiger furs with Euro 4,000.

At the auction were also Communist - era posters, medals, photos and flags, or the Time magazine from 1948 that has Ana Pauker, a Romanian Communist Party leader on the front cover.

It seems to me that most of the recent osicussidn on abortion has not focused on competing rights-claims, but on the situations in which people have abortions, and what follows. Here's a sampling from just this past week:Also in Time: From my (sparse) reading, these articles don't seem atypical. Just see what pops up when you google abortion middle ground. So while I'm used to the rhetoric of rights that I heard growing up, and used to the framing of the debate as it happens in ethics classes, it seems that most of the current media osicussidn I see is exactly what you're surprised by. There seems to be two reasons for this:1) Political: Pro-life advocates have focused their attentions on state elections and judiciaries, and work on piece-meal legislation rather than straight out overturning of Roe v Wade. Pro-choice supporters have adapted to this strategy and emphasize keeping abortions safe, legal, and rare. Perhaps also evangelicals are becoming less dogmatic (on the surface, at least), more politically savvy, and more aware of the complexities of the issue, but I'm not sure about that.2) People dealing with abortion as a political and personal issue have always been interested in the way that abortion ties into other issues: gender roles, family vs. career decisions, poverty, and so on. Many people for a long time (not just abortion supporters, but perhaps them moreso) have been aware of the interrelatedness of these and other issues. (One example is portrayed in the film *Vera Drake*.) Perhaps now it's just getting more media attention, but I'm in no position to judge that.So while I've heard the people unhelpfully yelling at each other about right to life vs. right to choose, smart people on both sides of the debate have always investigated further to see where and how abortions actually occur and their reasons and effects. Let's hope that continues, and not just on this issue.