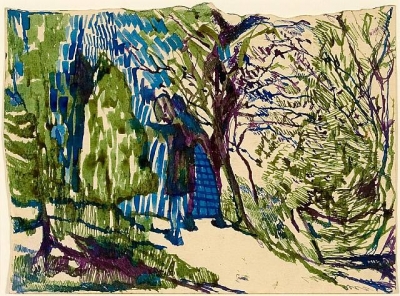 — After studying in the sciences, engineering, architecture and music, he decided in 1895 to study painting in Lausanne, Geneva and Paris. In 1897 he went to live with his US wife in Colorado Springs CO, where he taught at Colorado College. After falling ill with typhoid, his physical and mental condition deteriorated, and he returned to Morges. Years of unstable health and eccentric behaviour followed, during which Soutter produced some relatively conventional drawings, watercolors and oil paintings. Soutter may have been schizophrenic, or perhaps his life and work were just an attempt to resist society’s pressures rather than a pathological condition.
In 1923 Soutter was taken into a retirement home in Ballaigues, where he spent the rest of his life. It was during this period that the main body of his work was created. From 1923 to 1930, the so-called period of Cahiers, Soutter used simple copybooks for his drawings of people, nature and architecture, Classical and biblical scenes. During his Mannerist period (1930–1937) he expanded the format of his works and found a more independent style. He increasingly concentrated on compositions dominated by human figures. Distorted bodies, huge skulls and disquieting facial expressions convey feelings of pain and traumatic torment, as in Three Faces (1935). In 1937 he began to apply the ink directly with his fingers on to the paper. His lines became more vehement, and the contrast between light and dark was intensified. Increasingly he used the theme of the crucifixion as a metaphor for his vision of suffering and alienation, as in Blood of the Cross (1938)