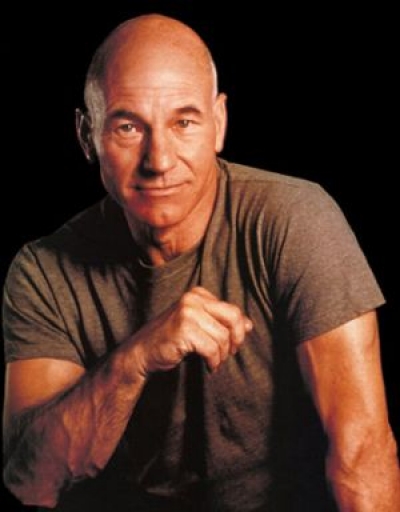 His first appearance on stage was at a local outdoor history pageant as Tom of Towngate when he was nine years old. At the age of 12, he entered the local secondary modern school where he continued to study drama. He has said that "the greatest thing that ever happened to me" was after he read Shylock aloud in front of his class and his teacher told him, "Stewart, you're good at this. You should do it for a living."

At 15, he dropped out of school and increased his participation in local theatre. He acquired a job as a newspaper reporter, but after a year, his employer gave him an ultimatum to choose acting or journalism. He quit the job. His brother tells the story that Stewart would attend rehearsals during work time and then invent the stories he reported. Supposedly, this caught up with him the night of a large fire of which, when questioned by his boss, he knew nothing about.

At 16 he was a furniture salesman, and in 1957 at the age of 17, he embarked on a two-year acting course at Bristol Old Vic Theatre School. He lost most of his hair by the age of 19 (alopecia runs in his family), but he successfully sold himself to theatre producers, after performing an audition with and without a wig, as "two actors for the price of one!". In 1964 he met the Old Vic's choreographer Sheila Falconer and they married on March 4, 1966. They had two children, Daniel Freedom Stewart and Sophie Alexandra Stewart and divorced in 1990.

Following a period with the Manchester Library Theatre, he joined the Royal Shakespeare Company in 1966 where he appeared next to actors such as Ben Kingsley and Ian Richardson — and even played on the company's football (soccer) team. He then moved to the Royal National Theatre in the early 1980s. Over the years, Stewart took roles in many major television series without ever becoming a household name. He appeared as Sejanus in I, Claudius; Karla in Tinker, Tailor, Soldier, Spy and Smiley's People; Claudius in a 1980 BBC adaptation of Hamlet and took the romantic male lead in the BBC adaptation of Mrs Gaskell's North and South (wearing a hairpiece).

Diehard fans will recognize him in a minor role as King Leondegrance in John Boorman's Excalibur (1981). He played the character Gurney Halleck in David Lynch's 1984 film version of Dune. Much of his part was cut from the original release of the film due to editing made to make the immensely long film shorter. Much of this footage was restored for the Fox Television broadcast of the film.

"It was almost entirely a blessing. It introduced me to a world I never expected to be a part of — celebrity, fame, financial success. It also gave me the chance to work with the finest group of people I've ever known."

Stewart has also said he is very proud of his work on Star Trek: TNG, for its social message and educational impact on young viewers. On being questioned about the significance of his role compared to his distinguished Shakespearean career, Stewart has said:

"One day, out of irritation, I said, you know all of those years with the Royal Shakespeare Company, all those years of playing kings and princes and speaking blank verse, and bestriding the landscape of England was nothing but a preparation for sitting in the captain's chair of the Enterprise."

The accolades included being called the "Sexiest Man on Television" (TV Guide Channel, 1992), which he considered an unusual distinction considering his age and his baldness. In an interview with Michael Parkinson, he expressed gratitude for Gene Roddenberry's riposte to a reporter who said, "Surely they would have cured baldness by the 24th century," to which Roddenberry replied, "In the 24th Century, they wouldn't care." A few years later, he described an event connected with his natural loss of hair whilst a guest of Jonathan Ross's talk show, whereby he had a last patch of hair that looked so out of place that while visiting friends his hosts actually held him back and cut off the offending lock. He also narrated the book The Last Battle by C.S. Lewis for Harper Audio.

Stewart had said after the failure of the latest film, another Star Trek: Next Generation film would be unlikely. In December, 2005, Stewart disclosed that talks are in the process for another Star Trek film, and that after his fulfilling his previous commitments, he would be open to the possibility of reprising his role as Jean Luc Picard.

In 1991, he performed his one-man-play adaptation of Charles Dickens' A Christmas Carol in which he performed the roles of all of the 40-plus characters himself. His radiant energy and marvellous performance was repeated the following year in 1992 and then 1993, 1994, 1996 and then again, to benefit September 11th charities in 2001. Stewart performed the play again for a 23-day run in London's West End in December 2005. For his performances in this play, he has received the Drama Desk Award for Best Solo Performance in 1992 and the Laurence Olivier Award for Best Entertainment for Solo Performance in 1994. 1997 would see Patrick invert Shakespeare's Othello. Originally a play about a black African entering a white Society, Patrick had wanted to play the title role since the age of 14, so he (along with director Jude Kelly), inverted the play so Othello became a White man in a Black Society. In 1998, he performed Prospero in William Shakespeare's The Tempest, on Broadway, in New York City.

He has played a great range of characters, from the flamboyantly gay Sterling in the 1995 film Jeffrey to King Henry II in Lion in Winter (2003) and Captain Ahab in Moby Dick.

Stewart has also starred in X-Men and X2 as Charles Xavier and the films' success has appeared to have resulted in another lucrative regular role in the burgeoning superhero film series. A third installment is coming underway scheduled for a May 2006 release.

Most recently, he has signed up to play the role of Professor Ian Hood, the lead character in the forthcoming ITV science-fiction thriller series Eleventh Hour, created by Stephen Gallagher. The first episode was broadcast on January 19, 2006.

In late 2003, during the eleventh and final season of NBC's Frasier, Stewart appeared on the show as a gay Seattle socialite who mistakes Frasier for a potential lover.

Although he has had a tremendous amount of success doing films, he prefers theatre. He told reporters that "Ingmar Bergman was once asked which he preferred and said, 'I love making movies, but the theatre is my life.' That exactly sums it up for me, too."

Stewart was made an Officer of the Order of the British Empire (OBE) in the 2001 New Year Honours list.

Stewart was at one time considered for the role of Willy Wonka in the movie Charlie and the Chocolate Factory to which he (like the rest of Hollywood) had great interest in playing. But his reason for wanting it is because he always loves playing characters from books.

Stewart has lent his recognizable voice to a number of projects. He has narrated recordings of Prokofiev's Peter and the Wolf, Vivaldi's The Four Seasons, C. S. Lewis's The Last Battle (part of the series The Chronicles of Narnia), and Rick Wakeman's Return to the Centre of the Earth, as well as numerous TV programs such as High Spirits with Shirley Ghostman.

He also was a voice actor on several animated films — including The Prince of Egypt, Jimmy Neutron: Boy Genius, Chicken Little and the English dubbings of the Japanese anime films Nausicaä of the Valley of the Wind and Steamboy — and voiced the pig Napoleon in a TV adaptation of George Orwell's Animal Farm as well as CIA Deputy Director Avery Bullock on the animated series American Dad and guest starred in the Simpsons episode "Homer the Great".

In addition to voicing his characters from Star Trek and X-Men in several related computer and video games, Stewart also worked as a voice actor on games unrelated to both franchises, such as Lands of Lore, Forgotten Realms: Demon Stone, and The Elder Scrolls IV: Oblivion. In 2005, Stewart voiced Bambi's father, The Great Prince of the Forest in Disney's direct-to-video sequel, Bambi II.

photo: http://cdn.collider.com/uploads/imagegallery/daniel_day_lewis/daniel_day_lewis__5_.jpg Biography Early life Day-Lewis is the son of Cecil Day-Lewis, Poet Laureate of England. His mother, who ...