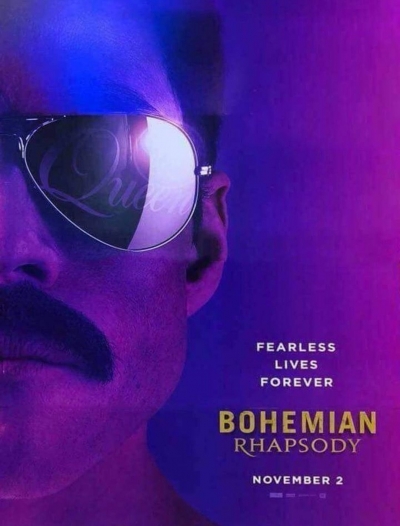 "Bohemian Rhapsody", the long-awaited Queen biopic that was first talked about many, many years ago, has finally hit theaters all around the world. And at first it has proven to be a box-office success, selling surprisingly well and proving once again that Queen is among the bands that don't lose their appeal and charm the older they get. And with several decades of musical history (starting in 1971), a lot of legendary songs and albums, concerts and various releases, as well as having Freddie Mercury as the vocalist Queen can not simply be ignored by any music afficionado.

While critics might have regarded the movie with far less enthusiasm (the same happened over the years with many of the band's records) the general public and fans seem to love it, at least most of them, that is if you watch the online reactions on sites and in social media. Yet, no matter how touching, energetic and well-made "Bohemian Rhapsody" has proven to be for the fans there are several points in time that the producers simply chose to change, to disregard key-moments in the band's history. Call them mistakes, call them bloopers or inspired changes, but these are just five of the times when "Bohemian Rhapsody" changed Queen history. There are more, of course.

1. Freddie Mercury didn't meet Brian and Roger in a parking lot, he had followed Smile for some time, being one of their most present and enthusiastic fans, if one might use this term. He had even shared a flat with Brian May and would meet the love of his life, Mary Austin, while she was dating the future Queen guitar player. More than that, Freddie had also been a part of other bands, such as Wreckage and Sour Milk Sea, so it wasn't like he didn't have any previous stage experience.

2. The band presenting the idea for We Will Rock You to a 1980s Freddie Mercury, wearing already his trademark moustache. Nice moment, but the song was already recorded for the 1977 News of the World album and also released as a single, together with We Are the Champions. Maybe it's nice to see them all in the studio and then go to stage, live and in full force, but it really wasn't how in happened. And die-hard fans spotted it at once. As if they could have let it go.

3. Playing in Rio all the way in 1977? The first time Queen toured South America was in 1981, being hailed as the greatest band ever (the concerts are still among the best of the bands performances) and would return for the Rock in Rio Festival in 1985, for two nights which were filmed and later released, as the band often did, as one sole performance. They also wanted to play South America in 1983, but they needed a break anyway and the whole deal fell through. So Rio in 1977? Not by a long shot.

4. Freddie Mercury didn't meet Jim Hutton, the one who stayed beside him for his final years, while Hutton was working a waiter, but in a bar. And the first encounter didn't come to anything, as Hutton himself wasn't a huge music lover and didn't know who Freddie was. At least that was he said later in his touching book "Mercury and Me". They would later get together and for Hutton Live Aid would be the very first time he ever saw Queen on stage, so at least he was there, as we can see in the movie.

5. During the emotional reconciliation (itself a moment which is a little hard to believe really happened) before Live Aid, a business like John Deacon proposes that for now on all songwriting credits will be split four ways, equally, unlike before. In reality they decided to do this in 1989, when releasing The Miracle. A long overdue decision for sure, but it will be several years for the four members to finally agree on it.

Same subject: john deacon | live aid | jim hutton | rio festival | news of the world | we are the champions | we will rock you | mary austian | brian may | freddie mercury
Comentarii 0 comentarii