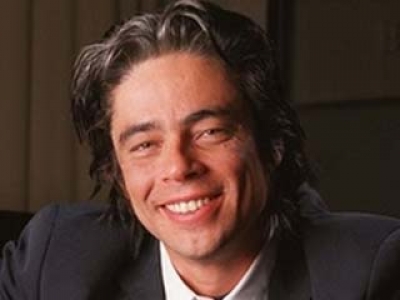 Benicio attended Academia del Perpetuo Socorro (The Academy of Our Lady of Perpetual Help), a Roman Catholic school in Miramar, Puerto Rico. When he was nine years old, his mother died of hepatitis. At age 13, his father moved his family to Mercersburg, Pennsylvania, near Chambersburg, where Benicio was enrolled in Mercersburg Academy, a boarding school.

After graduation, Del Toro followed the advice of his father and pursued a practical degree in business at the University of California, San Diego. Success in an elective drama course encouraged him to drop out of college and study with legendary acting teacher Stella Adler in Los Angeles, as well as at the Circle in the Square Theatre School in New York. Benicio hid his new career goals from his family until roles began to come his way.

He began to surface in small television parts during the late 1980s, playing mostly thugs and drug dealers on programs like "Miami Vice" and the NBC miniseries, "Drug Wars: The Kiki Camarena Story." Work in films followed, beginning with his debut in Big Top Pee-wee and in the 007 film Licence to Kill, in which 21-year-old Benicio held the distinction of being the youngest actor ever to play a Bond villain.

Although both films were considered box office disappointments, Del Toro continued to give worthy performances in movies like The Indian Runner (1991), China Moon (1991), Christopher Columbus: The Discovery (1992), Money for Nothing (1993), Fearless (1993), and Swimming with Sharks (1994).

His career gained real momentum in 1995 with his breakout performance in The Usual Suspects, where he stole scenes from his more seasoned costars as the mumbling, wisecracking Fred Fenster. The role won him an Independent Spirit Award for Best Supporting Actor, and firmly established him as "the guy to watch."

The heat from Suspects led to more strong roles in independent and major studio films. He played the charming, ruthless mobster Gaspare in Abel Ferrara's The Funeral (1996) and won a second consecutive Best Supporting Actor Independent Spirit Award for his work as Benny Dalmau in Basquiat (1996), directed by his friend, artist Julian Schnabel. Benicio also shared the screen with Robert De Niro in the big budget thriller The Fan, in which he played Juan Primo, a charismatic Mexican baseball star.

In 1997, Alicia Silverstone personally chose Benicio to costar with her in the quirky romantic comedy Excess Baggage, which she also produced. The film was generally panned, but critics singled out Benicio's distinctive screen presence and creative performance.

For Fear and Loathing in Las Vegas, the 1998 film adaptation of Hunter S. Thompson's legendary book, he packed on 40 pounds to play Dr. Gonzo (aka Oscar Zeta Acosta), Thompson's lawyer and drug-fiend cohort. Del Toro's highly immersive, uncanny performance divided critics and audiences. The negative reviews upset him, as he had fully invested himself in the role both emotionally and physically, even burning himself with cigarettes for one particular scene (later cut from the film). Even though del Toro has told interviewers this was a low point in his career, Terry Gilliam's surrealistic film has earned a cult following over the years.

Returning from a self-imposed two-year hiatus after Fear and Loathing, Benicio would gain a mainstream audience in 2000 with an impressive string of performances in four high-profile films. First up was The Way of the Gun, a sardonic crime yarn that reunited him with The Usual Suspects screenwriter Christopher McQuarrie, making his directorial debut.

A few months later, he stood out among a first-rate ensemble cast in Steven Soderbergh's Traffic, a complex dissection of the North American drug wars. As Javier Rodriguez -- a Mexican border cop struggling to remain honest amid the corruption and deception of illegal drug trafficking -- Benicio, who spoke most of his lines in Spanish, gave a heartfelt, multifaceted performance that dominated the film and earned him his first Oscar for Best Supporting Actor. His universally praised work swept all of the major critics awards in 2000, as well as the Golden Globe, and the Screen Actors Guild award for Best Actor. In addition to the critical accolades, Traffic was also a surprise success at the box office, bringing Benicio real Hollywood clout for the first time in his career.

While Traffic was still playing in theaters, two other del Toro films were released in late 2000/early 2001. He had a brief, memorable role as the diamond thief Franky Four Fingers in Guy Ritchie's hip caper comedy Snatch, and was powerful as a mentally-challenged Native American man in The Pledge, directed by his old friend Sean Penn.

All of this attention helped to cement Benicio's status as a sex symbol. His smoldering looks have led to comparisons with James Dean, Marlon Brando, and Brad Pitt, and placement on People Magazine's annual "50 Most Beautiful People" list. Although he stayed out of the limelight in 2002, Benicio had another banner year in 2003 with the release of The Hunted, an action thriller costarring Tommy Lee Jones, and the drama 21 Grams, an acting tour-de-force, costarring Sean Penn and Naomi Watts. He went on to garner another Best Supporting Actor nomination for his work in the latter.

His most recent work can be seen in the film adaptation of Frank Miller's graphic novel Sin City, directed by Robert Rodriguez. He is currently working on producing a film about the life of Che Guevara, in which he will play the lead.

In 2001, Del Toro became the fourth Oscar winner whose winning role was a character who speaks predominantly in a foreign language.
He is the third Puerto Rican actor to win an Oscar. The other two were actors Jose Ferrer and Rita Moreno.
The night he won his Oscar, it was the first time that two actors born in Puerto Rico were nominated in the same category. (The other actor was Joaquin Phoenix for his role in Gladiator).